Water is a major element of all agricultural operations. However, often times water quality problems plague managers by creating operational and sometimes even regulatory problems that reduce productivity. EP Aeration has helped managers solve water quality issues at a variety of agricultural operations including vineyards & wineries, dairies, orchards, leafy greens, green houses and much, much more. Whether you need help with your irrigation reservoirs, tanks, or wastewater lagoons, EP Aeration has a low cost, chemical free solution for you. Scroll down for more information and some examples of our solutions. 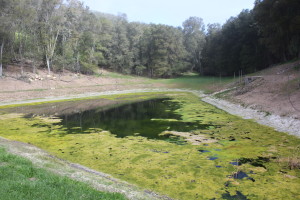 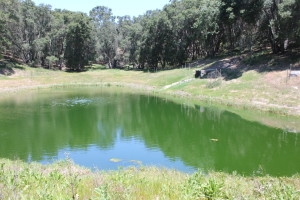 The images below show a ½ acre, irrigation/fire suppression reservoir. The owner approached us due to a severe planktonic algae bloom which necessitated frequent filter back-flushing and cleaning/replacement of drip emitters. Because it’s an organic vineyard and they wanted to have fish in the reservoir for recreation, algaecides were not a viable option. EP Aeration was commissioned to design, install and maintain this pond aeration system which consists of a Uni1-2013 for air and ozone production, and 150’ of LWA-1.5 linear aeration tubing. Visibility upon first inspection was about 18 inches. We returned 10 days after installation to find it as it is shown in the “after” photos. The bottom of the reservoir (10 feet deep) is clearly visible. This has improved pump efficiency, reduced the amount of water wasted for back-flushing and reduced emitter replacement. EP Aeration continues to provide aeration maintain enance services for this customer. 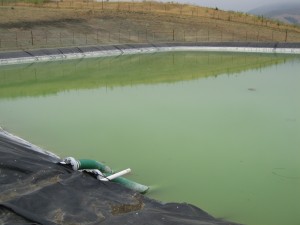 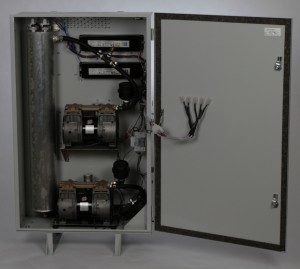 The reservoir below is 1 acre and 28 feet deep and used not only for irrigation, but for recreation as well. The owners, family and friends also enjoy swimming and fishing in the reservoir. EP Aeration was contacted regarding a fish kill. After an onsite consultation it was learned that the common vineyard irrigation practice of sulfuric acid injection was employed at this location. This practice, while beneficial for soil, can strip oxygen out of reservoirs if over applied. EP Aeration designed and installed an aeration system to combat oxygen depletion and prevent fish kills by using a Uni2-2006 air/ozone generator and a single DM-LTC diffuser. There have been no further fish kills and the water quality remains clean, clear and inviting. EP Aeration continues to maintain this system. 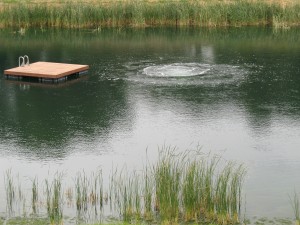 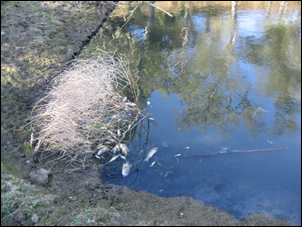 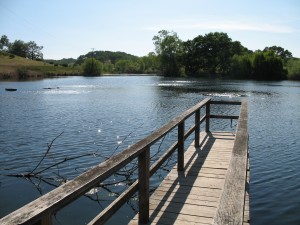 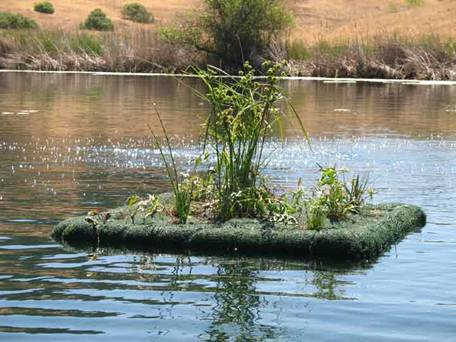 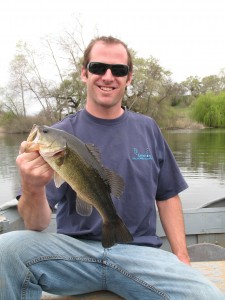 Vintners Inn: Santa Rosa, CA
This 1.5 acre reservoir is 8-10 feet deep and serves several beneficial uses at Vintners Inn including frost protection, fire suppression, vineyard irrigation and landscape irrigation. The property manager contacted EP Aeration regarding a strong smell of hydrogen sulfide (rotten egg smell) when they irrigated. This was causing them to not irrigate as much as they should in fear of disturbing the ambiance of this beautiful resort and event center in the heart of wine country. EP Aeration provided an initial survey and consultation including an oxygen and temperature profile that unveiled a strong thermocline and low dissolved oxygen levels at the lower depths. EP Aeration designed and installed a basic system that utilized an existing pump building so that we did not have to provide a compressor enclosure. The system consists of two 1/3rd horsepower air compressors and three DM-LWA1.5 air diffusers. The odors were eliminated within two weeks and they have been able to irrigate as needed ever since. 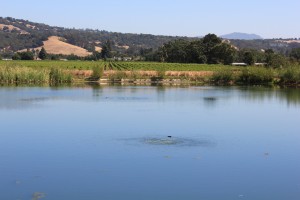 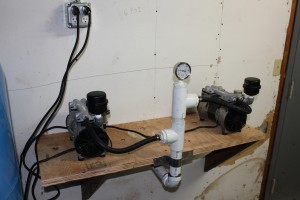