Just as humans need oxygen to live, so do the crucial members of an aquatic ecosystem. However, without natural or artificial aeration and mixing, many lakes, ponds and reservoirs become thermally stratified, anaerobic, and rich with nutrients. These are prime conditions for common water quality problems such as algae blooms, odors, and fish kills. Beneficial microorganisms and higher life forms need oxygen in order to survive and convert organic sediments and nutrients into biomass which can then be consumed by even higher life forms. By supplying life-giving oxygen to these organisms, EP Aeration grows beneficial biomass while starving algae of nutrients and providing a healthier ecosystem. 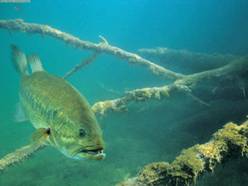 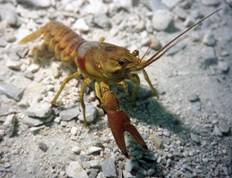 Your Water and the Life Within It Needs Oxygen!

Your water needs oxygen…
Each body of water has a Biochemical Oxygen Demand (BOD), which, if not met, can cause oxygen depletion. Even non-living materials, like iron, manganese and minerals will consume oxygen. Oxygen depletion of the lower layers in a wastewater lagoon, lake, pond, or large water feature can cause:

Aeration, properly applied, will meet the BOD of the water body, and produce positive dissolved oxygen (DO) levels and homogenous temperature throughout the water column. Benefits of sub-surface aeration:

Moving water from the lowest levels of the pond, lake, or wastewater lagoon, to the surface, is an important job of aeration. Even with the high oxygen transfer rate of our systems (3% per foot of water depth), much of the oxygenation takes place at the surface where water absorbs oxygen from the atmosphere. That’s where our industry leading mixing rates come in to play.

Bottom aeration makes the most sense, because that’s where oxygen is most needed – at the bottom, or sludge layer. By mixing the entire water column several times per day, bottom aeration eliminates thermal stratification and produces high oxygen levels at the sludge/water interface. This encourages the growth of beneficial microorganisms and other life forms that digest organic muck and consume nutrients that might otherwise become a source of food for algae.

Oxygen at the sludge/water interface also suppresses the release of metals like iron and manganese as well as substances that nourish filamentous algae, anaerobic bacteria and pathogens.

LAMINAR FLOW TECHNOLOGY™
Fine-bubble, bottom-laid aeration also moves the most water at the lowest cost. By producing a gentle, laminar flow of small bubbles, at a consistent rate of rise, water molecules are moved easily to the surface, where oxygenation occurs.  EP Aeration’s fine-bubble, bottom-laid aeration systems are the least expensive to operate because our diffusers have the highest mixing rates in the industry. We can circulate as much as 22 million gallons of water per day with as little as 1/2 horsepower!

Aerators that create coarse bubbles, such as air stones and flex diffusers, employ an uncontrolled release of air, which has been shown to be much less effective at moving water compared to fine-bubbles. Large bubbles and uncontrolled air release create a phenomenon identified by the Army Corps of Engineers as the “coning effect”. As the bubbles rise swiftly to the surface they entrain or cone with each other, creating turbulence. Turbulence produces eddy currents in the water which inhibit convection and can scour the bottom, thus stirring up the bottom sludge. The gentle, laminar flow of bubbles produced by EP Aeration systems, creates convection and circulation in the water more efficiently than course bubbles. Our systems also produce the highest documented oxygen transfer levels in the industry. 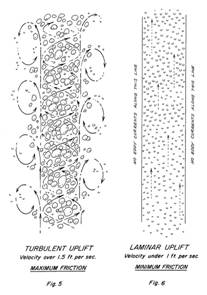 LAMINAR FLOW TECHNOLOGY™
Does not roil the bottom, keeping nutrients sequestered in the sludge.

This illustration shows the relative effectiveness of a laminar flow versus a turbulent bubble pattern. The crucial difference is in the amount of water moved to the surface from the bottom, without disturbing the sludge layer. 100 feet of our triple cut tubing can circulate more than 22 million gallons of water per day without turbulence.

In the early 1990’s EP Aeration pioneered the use of Activated Oxygen Aeration Systems (ozone aeration) in lakes, ponds and water features. Due to its effectiveness, the market quickly accepted the technology as the industry standard. However, over the past two decades we’ve learned that there are applications where ozone can be quite effective, and others situations where it doesn’t necessarily justify the added expense. This is one of the areas where EP Aeration’s free design and consultation services can help you get the most bang for your buck.

E P Aerationsystems generate ozone in two ways, each of which mimics the way ozone is produced in nature. Generally, our lake and pond systems utilize ultraviolet light to produce the small amounts of ozone appropriate to that application. In our recirculation, closed-loop water treatment systems, we utilize corona-discharge (high-voltage electricity) generators, which produce larger quantities of ozone which are usually injected directly into the recirculation pipe or pump system. The availability of both types of ozone generators and the modular nature of our systems allows us to customize systems to solve a myriad of specific problems in a wide range of applications and industries.