As an illustration of just how quickly a massive algae bloom can occur, look at these photos of the massive algae bloom a month before the scheduled start of the Beijing Olympics. This occurred in the OCEAN, in the bay where Olympic sailing competition was to be held. These photos date from early July. Some of the massive bloom was detected in May, but the rapid growth and sheer size of the bloom had reached biblical proportions in a month. Chinese experts said that it may have been caused by pollution running off into the bay. 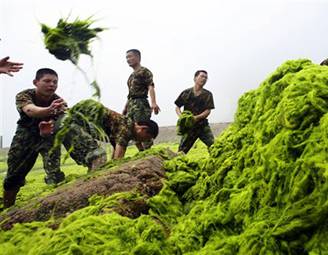 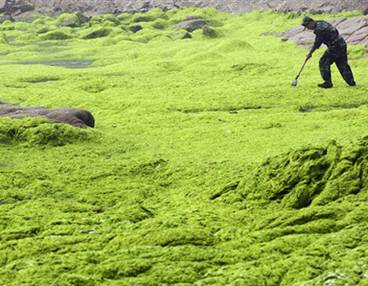 Runoff from urban sources and fertilized turf can produce a troublesome algae bloom, literally overnight in a lake or pond. We certainly don’t claim we could have solved this ocean-going problem, because of the scale (19+ square miles) and the variables such as tides present in the ocean.  This episode does illustrate how quickly a huge bloom can occur. It should be noted that low oxygen levels near the sea bottom can accelerate the growth by releasing nutrients from runoff more quickly. We call that an “anoxic release”, and occurs most often in the fall in lakes, reservoirs, and large ponds. Bottom-laid, fine-bubble aeration is a solution, producing balanced oxygen levels and temperatures throughout the water column.